So, Dick Cheney has a case of the “confuseds” when it comes to recognizing which branch of the government he belongs to. Sounds like someone has an “identity” crisis. Dr. “Dick” seems to think he is a separate branch of the government – alongside the Judiciary, Executive and Legislative branches. David Addington, his Chief-Enforcer seems to be supplying the intellectual firepower for this stance.

Fortunately for the Republic, the very next day, with the very real threat of a funding cut-off from the Democratically controlled House budget committee, Mr. Addington backpedaled and muted his contention that the Vice-President’s office remained separate and apart from the rest of the government. Democratic Congressman Rahm Immanuel’s implicit cut-off threat the day before seemed to do the trick.

God knows what Cheney has inside those full-scale metal safes he keeps in his wing of the Executive Branch. It seems that he stamps virtually every document as “Classified” and then stashes it in one of his safes to remain completely unavailable for further inspection by any agency, including the National Archives folks.

Mr. Cheney is the author of the War on Iraq with the false premise of Weapons of Mass Destruction. Dr. Evil is the progenitor of the NSA’s mass warrantless wiretapping. Dr. Strange One is certainly the principal author of the torture memoranda as well as being the prime mover behind the Guantanamo Bay Detention Facility.

It is noted in first-hand accounts that on September 11, 2007, while in the White House underground Executive Bunker, Cheney, Condoleeza Rice and others witnessed the televised coverage of the Twin Towers attack. One witness noted that while others were heard to be uttering moans of disbelief, Vice President Dick Cheney remained utterly mute and sphinx-like. It appears this singular event marks Dick’s “extraordinary epiphany” of sorts.

Whatever the real inner-workings of Dr. Dick’s mental landscape there is one thing that is quite clear. This Vice President pulls all the levers of power while hiding behind the facade of a supposedly “in-charge” President. Nothing could be further from the truth. Cheney, for all practical purposes, is Commander-In-Chief and Court of Last Resort.

Is it not time for the Democratic party to grow an extremely large pair of cajones and – with ALL DELIBERATE SPEED – seize these two men by their cajones – and render this Administration inert. It would not hurt to recapture the White House in 2008.

See you at the polls in November, 2008. Better take a digital camera and “record” the vote you supposedly cast. 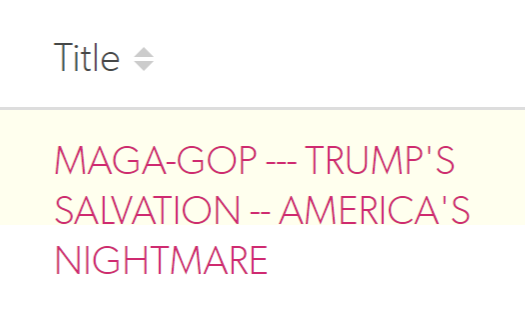