Video link below to Senator Wayne Morse’s (D-OR) appearance on CBS’s “Face The Nation” – (May 24, 1964) –
responding to the program moderator, journalist Peter Lisagor.

(above video-link includes narration by Norman Solomon/”War Made Easy” video).

There’s an old saying, “no balls, no glory.” That’s precisely what is lacking in today’s version of the Democratic Party.  With the exception of Democratic Rep. Barbara Lee’s September 14, 2001 House of Representatives appearance in which she called for restraint and a measured response in reaction to the September 11th Twin Towers bombings the Democratic Party has been all-too-often a mere echo of that “other” party – the one that sees fit to tread on the “dark side.” 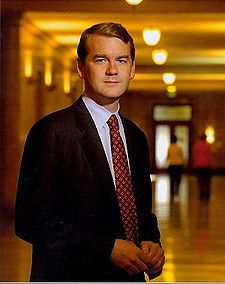 It’s too early to tell but it appears that Sen. Morse may have a latter-day disciple in the likes of the freshman U.S. Senator from Colorado, Michael Bennet, who has taken the bull by the horns and disseminated a letter among his colleagues that calls for the reinstatement of the Public Option into the health care legislation under consideration in Congress.  At last count as of the close of business on Friday it had amassed 19 signatures, including Senators Diane Feinstein and Arlen Specter!

Here’s looking at you Senator Bennet.  The Dems could use a heavy dose of “Rocky Mountain High” to get this damn Public Option measure rammed through the herd of brain-dead Republican Elephants who are snorting & bellowing against the strong tide of long-over-due demands for real change taking place in this country today!

I’m hoping that Lee Marvin is lurking somewhere just right behind you with that evil, malicious grin ready to plug any Repugnant daring to stand in the way of civilized progress.

In case anyone needs reminding, as stated by candidate Barack Obama himself during the 2008 presidential campaign – “We Are The Change We’ve Been Waiting For”. It’s going to be one part Wayne Morse AND one part Michael Bennet that will hopefully add up to a Public Option within a truly sane health care bill.

[SEE BIOGRAPHICAL INFO ON Wayne Morse Below.  Started out as a Republican but ended up a Democrat.]

MORSE, Wayne Lyman, a Senator from Oregon; born near Madison, Dane County, Wis., October 20, 1900; attended the public schools; graduated from the University of Wisconsin at Madison in 1923, and received a graduate degree from that institution in 1924; graduated from the law department of the University of Minnesota at Minneapolis in 1928, and from the law school at Columbia University, N.Y., in 1932; held a reserve commission as second lieutenant, Field Artillery, United States Army 1923-1929; taught argumentation at the Universities of Wisconsin and Minnesota; assistant professor of law at the University of Oregon at Eugene 1929, associate professor 1930, and dean and professor of law 1931-1944; member of the Oregon Crime Commission; administrative director, United States Attorney General’s Survey of Release Procedures 1936-1939; Pacific Coast arbitrator for the United States Department of Labor (maritime industry) 1938-1942, and also served in other capacities of the Labor Department; chairman of the Railway Emergency Board 1941; alternate public member of the National Defense Mediation Board 1941; public member of the National War Labor Board 1942-1944; elected as a Republican to the United States Senate in 1944; reelected in 1950; reelected as a Democrat in 1956 and again in 1962, and served from January 3, 1945, to January 3, 1969; unsuccessful candidate for reelection in 1968; lecturer and labor arbitrator; distinguished visiting scholar, State University of New York 1969-1970; unsuccessful Democratic candidate for the United States Senate in 1972; won the Democratic senatorial nomination in 1974 and was actively engaged in campaigning when he died July 22, 1974, in Portland, Oreg.; interment in Rest Haven Memorial Park, Eugene, Oreg.