The Republican National Committee released earlier on Monday an “autopsy” of its 2012 election. 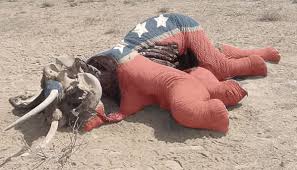 Why bother to put it down in my “own” words – when it’s available, hot off the press in today’s edition (March 19, 2013) of that despicable Newsmax news site.  Good God, I never thought I’d be lifting news copy wholesale off of that “rag” site and inserting it into my own blog site but the web article on Newsmax speaks volumes.  It’s the GOP AND their OWN damn report that shows conservatives are “narrow-minded” and “out-of-touch”, hello!!!!

On his radio show, Rush Limbaugh is quick to denounce it; I mean, after all, it is a most-damning indictment on the very premise behind his whole radio gig.  Maybe it’s time for Limbaugh to invoke that old hymn:  “Rock of Ages”.  He might want to add that little “fixture” to his radio gig from here on in.

As Janice Joplin herself would belt out:  “Take Another Piece of My Heart” (and another “piece of my mind” as the rest of us sane-thinking human carbon-life forms might also add).

Rush Limbaugh blasted the Republican Party for saying in a new report that conservatives were “narrow-minded” and “out of touch”.

The Republican National Committee released earlier on Monday an “autopsy” of its 2012 election failures and pinned the blame on the party being out of touch with voters, particularly minorities.

Limbaugh said that if the party moves away from championing values, such as traditional marriage, it will lose support among its base.

“If the party makes that [gay marriage] something official that they support, they’re not going to pull the homosexual activist voters away from the Democrat Party, but they are going to cause their base to stay home and throw their hands up in utter frustration,” Limbaugh said.

Limbaugh said it was party leaders who were out of touch with its own base. “Whether they like it or not, the Republican Party’s base is sufficiently large that they cannot do without them and their problem is they don’t like them. It really isn’t any more complicated than that.”