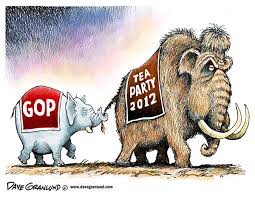 They’re coming.  No, not Al Qaeda.  Not the Russians, Chinese, Syrians, North Koreans, Iranians or the White Aryan Racists or the Militia Crowd.

Who then?  They are the mindless zombies masquerading in the guise of Tea Party subscribers.  Anything that moves or happens in this country that aims for progress or enlightenment will be pounced upon like a vampire pounces on his intended victim.  Go for the jugular.  No quarter given, EVER!

And then, when not seeking to eviscerate anything that smacks of true forward human development they will instead take any tid-bit of news and blow it up & out of all proportion to go after so-called Big-Government.

How about the IRS scandal?   Look, when you apply for a 501(c)3 or 501(c)4 status you’re supposed to be a NON-PROFIT & EXCLUSIVELY engaged in “social-welfare” activities.  Anything with a Tea-Party moniker in its description is NONE OF THAT.  BUT MORE IMPORTANTLY, the real reason those Tea Party groups all flooded the IRS in 2010 with their 501(c)4 applications was solely at the behest (now, how’s that for a “word”) of the billionaire titans who could then donate their money – anonymously – to these groups who were for all intents & purposes – POLITICAL!!! (lol)

Okay, now, how about the AP scandal?  There are two incidents that triggered the wire-tapping of 20 AP reporters over a two-month period.  Let’s see, maybe the one with the North Korean-specialist, Stephen Jin-Woo Kim, a State Department security adviser (who was already indicted in 2009 for statecraft improprieties) who passed-on National Security classified information to the effect that the North Korean strategy of missile launching was based on the imposition of international sanctions on North Korea.  This juicy bit of national security info was passed on by Mr. Kim to James Rosen, Fox News Washington Correspondent and in so doing our embedded North Korean operative was outed.

The other incident involved a leak of the fact that the CIA had an embedded mole in an Al Qaeda cell in Yemen and had found out that Al Qaeda had perfected an advanced “underwear bomb” and was ready to use it.  On top of this, the CIA embedded Yemen-based Al Qaeda operative was to be the actual suicide bomber.  Both of these situations involved legitimate State Secrets.  The AP ended up publishing this information and so the White House justifiably went ballistic.  I’m sorry, I’m going to side with the White House on this one unless someone can convince me that these are not legitimate State Secrets! (double-lol)

Now, that just leaves us with the Benghazi scandal (Our embassy was overrun and 4 people were killed in Libya last Fall).  Let’s just say that the “Talking Points” that the zombie-crazies (read: Tea-Party Flea-Baggers) harp on incessantly were crafted BY THE CIA – NOT, I REPEAT, NOT, by the White House.  The White House released the entire bulk of emails and in no way is there anything found in them to give any creedance to the Tea-Party bomb throwers’ (Republican Senator Lindsey Graham-S.C.) allegations of a cover-up.  And as I’ve written previously, former Defense Secretary Robert Gates summed it up succinctly:  “There’s No There, There”. (triple-lol)

So, where the fucking fuck is the scandal, the so-called Sturm und Drang?

Nothing will be done in Congress in the way of ANY meaningful legislation until AFTER November-2014.

It’s gotten so bad that Senate Leader Harry Reid is (yes, once again) threatening to invoke the NUCLEAR OPTION (the Senate wrecking ball against the fillibuster) for the presidential judicial appointments under consideration.  He’s given notice to the GOP that they have until July before he will most likely actually exercise it this time so that the President can at least have an up-or-down vote on his judicial nominees. How novel?

I might mention Obamacare.  A good many of the states are just sitting idly by and not even attempting to set up insurance exchanges.  You have Human & Health Services Secretary Kathleen Sebelius trotting around the country hitting on private medical groups to help set up exchanges in their respective states.  Good God, I thought the legislation passed Congress in 2010.

And the clincher – President Obama’s speech on Thursday of this week clearly calling for the END of the ENDLESS WAR on terrorism and terror.  His declaration that we need to be more “disciplined” in our approach to security or else we will be engaged in endless wars is probably the most definitive statement on foreign policy since Dwight Eisenhower’s 1961 Farewell Address in which he warned of the dangers of the Military-Industrial-Complex.

The Tea Party and its promoters, hangers-on, groupies, funders, and enablers must be ground to dust,  just like we are trying to grind to dust any and all Al Qaeda operatives.

THE ENEMY IS WITHIN.  That’s the only way this supposedly-great nation will ever succumb.  Right now, the Enemy is chomping at the bit and anyone who doesn’t “get it” better take another Zantax, or Prozac, or just get a lobotomy.