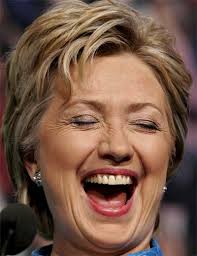 8 hours into the Benghazi hearings, with no end in sight, GOP Representative Martha Roby (Alabama) really stepped into it big-time with her inane line of questioning to Secretary Hillary Clinton at the Benghazi Hearings on October 22, 2015.  Up to this point Madam Hillary had been brushing off one after another inane lines of questioning

Rep. Roby’s questioning went as follows:  “were you home alone?” AND “were you home all night?” with regard to Hillary Clinton’s whereabouts on the evening of Sept. 11th, 2012, the night of the attack by Libyan insurgents on U.S. diplomatic personnel in Benghazi?

After quickly reflecting on the questions Madam HillRod then immediately broke out into a loud, spontaneous cackling laugh – her face lit up like a Christmas Tree.

Lady Hillary went on to remark — “It’s 7:15 pm – and just a moment of levity”.  She then answered the primary thrust of Roby’s line of questioning which had to do with the availability of secure communications within Secretary Clinton’s Washington, D.C. residence  — “Yes, I have a secure phone line in my home”.

A loud cackling laugh — almost hysterical.  God, I’d run that as one of her campaign ads — sure as shit dispels any lingering myth that she is contrived or disingenuous!

Frankly, it is arguable that a few more well-placed cackles would’ve brought the curtain down a lot sooner on these trumped-up hearings (11-hours in length) than anything else.

Well done, Madam HillRod — A cackle worth its weight in gold.  We need to have more of them cackles between now and Nov. 8, 2016.  Cackle away, madam, cackle away.

That seems to be your silver bullet when doing battle with these meanie GOP weenies.

https://paulrevererides.wordpress.com/feed — “Feed” For All 631 WordPress Posts