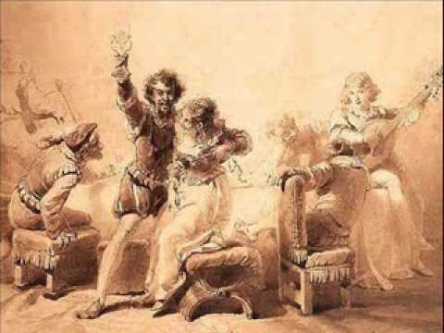 He returned to Baltimore on Sept. 14 and was so inspired by the U.S. pluckiness that he wrote a poem, “Defence of Fort M’Henry,” which he published on Sept. 20, 1814.

Key wrote the words to the Star Spangled Banner his poem to fit the beat and melody of British composer John Stafford Smith’s — “To Anacreon in Heaven”.  This Song, in turn, was itself written for the benefit of an exclusive London gentlemen’s club – The Anacreontic Society – founded in 1766 by Jack Smith.  The song itself was a song that celebrated love, sex and wine.

It was in the form of a poem written in the style of the ancient Greek poet – Anacreon – the “convivial bard of Greece”, the celebrated Greek lyrical poet (560-478 B.C.E.), born at Teos in Ionia. Anacreon was known for his celebrations of love, sex and wine.

Around 1780-1781 the song was first performed – by The Anacreontic Society – at the Crown And Anchor Tavern in The Strand section of London.  The words of the song are generally attributed to Ralph Tomlinson Esq., late President of that Society.

The Anacreontic Song — made explicit references to 2 Roman Gods — Venus – the Roman goddess of love, beauty, desire & sex & Bacchus – who was the Roman god of wine

The Anacreontic Society itself came to an end after the Duchess of Devonshire attended one of its meetings.  Because “some of the comic songs [were not] exactly calculated for the entertainment of ladies, the singers were restrained; which displeasing many of the members, they resigned one after another; and a general meeting being called, the society was dissolved.”  It is not clear exactly when this incident occurred, but in October 1792 it was reported that “The Anacreontick Society meets no more; it has long been struggling with symptoms of internal decay“.

The two (2) key words to keep in mind regarding this old English song – “To Anacreon In Heaven” – which is an ode to love and wine  — are the words — “intwine” & “myrtle”.   The word “intwine” itself means to wrap around, or coil around — as in — they had their hands “wrapped around” one another.  “Myrtle” means a kind of leaf or vine.  So, with that in mind — let’s go through 3 verses of this song .

Now, for the 1st verse —
To Anacreon in Heav’n, where he sat in full Glee,
A few Sons of Harmony sent a Petition,
That he their Inspirer and Patron would be;
When this answer arriv’d from the Jolly Old Grecian
“Voice, Fiddle, and Flute, no longer be mute
“I’ll lend you my Name and inspire you to boot,
“And, besides I’ll instruct you, like me, to intwine
“The Myrtle of Venus with Bacchus’s Vine“

Now for the 2nd verse —
The news through Olympus immediately flew;
When Old Thunder pretended to give himself Airs.
“If these Mortals are suffer’d their Scheme to persue,
“The Devil a Goddess will stay above Stairs.
“Hark! already they cry, “In transports of Joy,
“Away to the Sons of Anacreon we’ll fly,
“And there, with good Fellows, we’ll learn to intwine
“The Myrtle of Venus with Bacchus’s Vine.

Now for the 3rd verse —
Ye Sons of Anacreon, then join Hand in Hand;
Preserve Unanimity, Friendship, and Love!
‘Tis your’s to support what’s so happily plann’d;
You’ve the sanction of Gods, and the Fiat of Jove.
While thus we agree, Our Toast let it be.
May our Club flourish happy, united, and free!
And long may the Sons of Anacreon intwine
The Myrtle of Venus with Bacchus’s Vine.