With that clenched + jutting jaw — America’s “sweetheart”, Kelly-Ann-Conway never fails to “confab” her way in front of the cameras to “soosh” away anything that festers within Trump World.

It should be apparent that she is nothing more than a punching bag for anyone who is NOT a “deplorable” — which is at least two-thirds of this country.

Somehow Kelly managed to acquire a law degree and run a two-bit polling outfit before hitching her star on to the biggest dog + pony show on planet earth – the “Trump” circus.

It’ll be most entertaining to see her bend herself into a pretzel to deal with the inevitable impeachment proceedings that will ensnare her boss within the next year.

No doubt she’ll blame it on the big + bad “Deep State” — who after all — “created” Donald Trump only to then work to crush him, go figure!

I think the lying little bitch is hoping that Trump can parlay his White House “run” into another TV network to rival FOX & then catapult Little “Miss Kelly” into a Talking Head Role – aka Sean Hannity!

The only trouble, Kelly, is that your lying son-of-a-bitch boss will most likely be nailed for various counts of obstruction of justice & collusion with a foreign power — all predicated to gain him the presidency.  Maybe Trump can start a news front operation from inside prison.  If that’s the case, then sure, Kelly, you can take your microphone + camera into Lewisburg Penitentiary & interview and comment on your “Big Daddy”.

But, then again, Conway Tweety, it’s possible that the Russia “stink” will have left something on you as well — giving Special Prosecutor Robert Mueller yet another “cooperating” witness.  Then, you’ll be well-positioned to “sing like a bird” on camera — like Michael Flynn & Steven Bannon before you — & really “dish-the-dirt” on your dirt-ball president.

It’s possible you’re already “punched out” by this time & seriously planning on “cashing-in” your chips @ the window on your way out.  We understand that Bob Mueller will offer generous terms in exchange for some “heartfelt” cooperation.  Sweetie, we’d hate to see you get old + wrinkled in prison.  Don’t think that’s your style, toots.

Hell, Kelly, you can do a Paul Manafort & look around for a deep-pocketed Russian oligarch who needs a “spokes-mouth-person” & then run the gravy train for all its worth.  Ask Manafort, he worked for 2 or 3 of those “capital” fellows & made a fucking “mint”.

If all else fails, Kelly, you can start your own “Alt-Reality” TV show — the logical extension of the Reality Show genre.  Think of all of the fun counter-logical shit you could come up with for all the “pod” people within Trump’s 30% base.

But, in the end, Kelly, you should do an “extreme” makeover and go BIG — aim to be the next big TV televangelist with your own Mega-Church somewhere on the East Coast.  AmeriKKKa needs another Billy Graham.  You can give them that — you’re “Kelly-Ann” — Sister Kelly-Ann — so, keep those pledges coming in, folk’s!

After all, “bull-shit” begets more “bull-shit”.  Why stop when you’re on a roll.  It worked for Joseph Goebbels.  Next to Trump, you’re the world’s greatest lying sack-of-shit.  You can even market your own baseball cap like the Trumpster did —- only this time it’ll read —- Make-America-FAKE-Again. 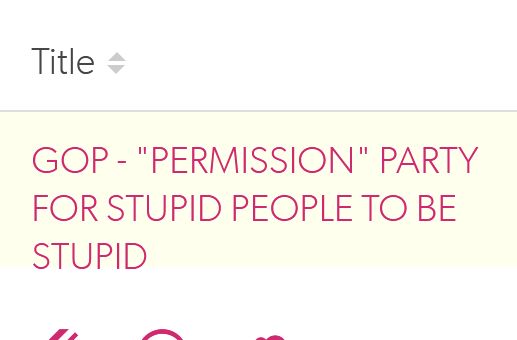