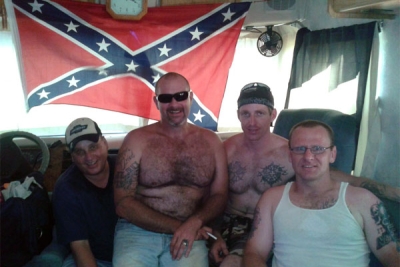 “Yes, he has an intrinsic hostility to people who are not white, particularly when they challenge him, but as a matter of policy, the whole idea of building a wall for which Mexico would pay was just a cheap campaign stunt to, once again, please the people in front of him.

Trump is not committed to that wall on principle.  He is committed only to looking good as a result of whatever comes of it.  Mexico is never going to pay for it, and he knows it.  He has always known it.  That was just another lie.  Someone must have stuck the phrases “chain migration” and “diversity lottery” into his brain — easy buzzwords, you see — and he can now rail against those ideas for applause lines.

But he is completely malleable on actual immigration policy.  He doesn’t have the stamina for that much reading. Learning about immigration would require reading more words than would fit on a television news chyron.

That is because Trump is man-as-message, man-as-messiah.  Trump support isn’t philosophical but theological.  Trumpism is a religion founded on PATRIARCHY and WHITE SUPREMACY.

It is the belief that even the least qualified man is a better choice than the most qualified woman and a belief that the most vile, anti-intellectual, scandal-plagued simpleton of a white man is sufficient to follow in the presidential footsteps of the best educated, most eloquent, most affable black man.

As President Lyndon B. Johnson said in the 1960s to a young Bill Moyers:  “If you can convince the lowest white man he’s better than the best colored man, he won’t notice you’re picking his pocket.  Hell, give him somebody to look down on, and he’ll empty his pockets for you.”

Trump’s supporters are saying to us, screaming to us, that although he may be the “lowest white man,” he is still better than Barack Obama, the “best colored man.”

In a way, Donald Trump represents white people’s right to be wrong and still be right.  He is the embodiment of the unassailability of white power and white privilege.

To abandon him is to give up on the pact that America has made with its white citizens from the beginning:  The government will help to underwrite white safety and success, even at the expense of other people in this country, whether they be Native Americans, African-Americans or new immigrants.

For white supremacy to be made perfect, the lowest white man must be exalted above those who are black.

No matter how much of an embarrassment and a failure Trump proves to be, his exploits must be judged a success.  He must be deemed a correction to Barack Obama and a superior choice to Hillary Clinton.  White supremacy demands it.  Patriarchy demands it.  Trump’s supporters demand it.“